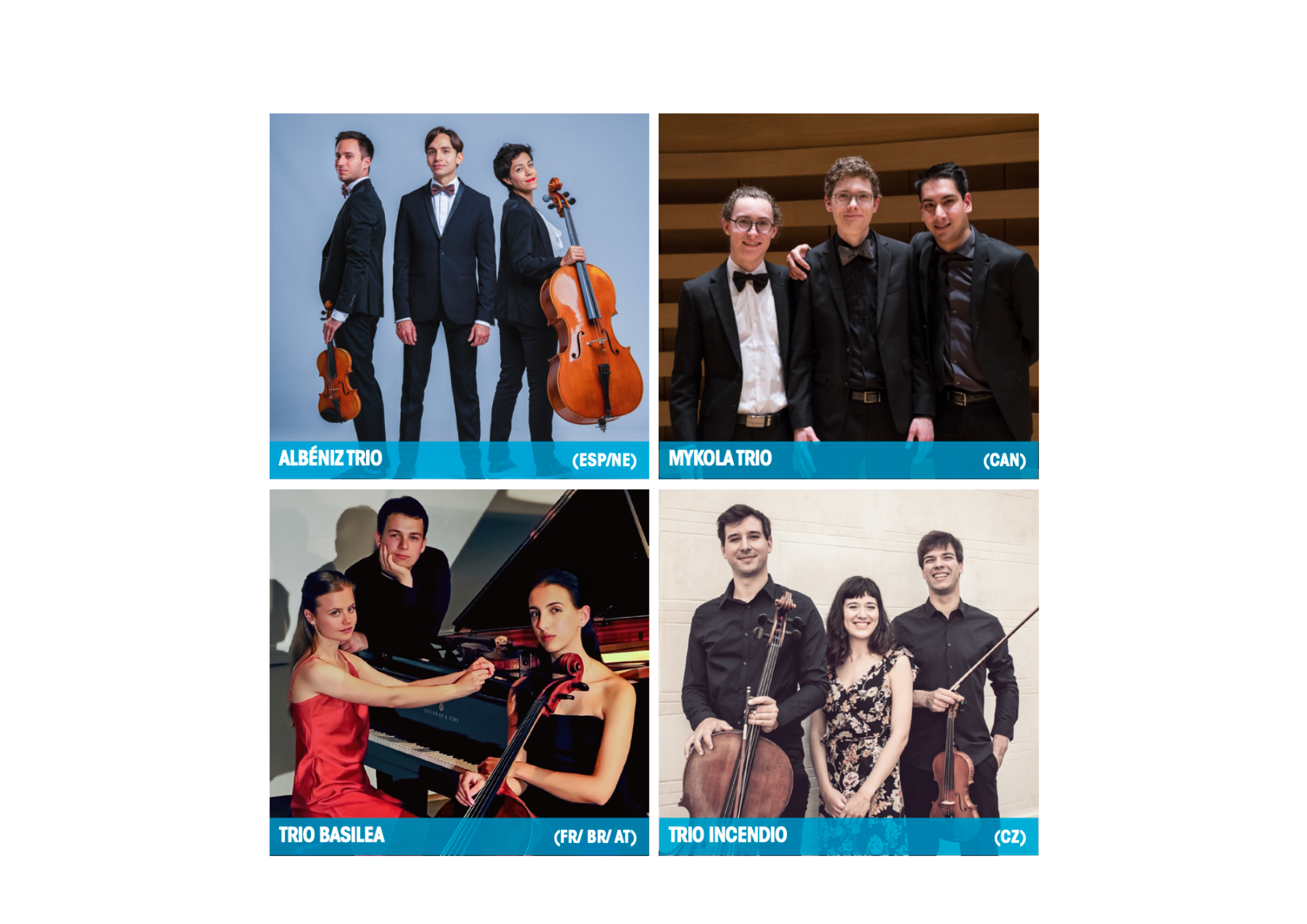 Albéniz Trio was founded in 2017. Based in Amsterdam and Madrid, they have been working together and have since performed in different venues in several European countries such as the National Auditorium of Music, Sony Auditorium and the Juan March Foundation in Madrid, Het Concertgebouw, and Muziekgebouw in Amsterdam, Tauberphillharmonie in Baden-Wurtemberg, Germany, and Tívoli Vredenburg in Utrecht, among others.

The members of the Albéniz Trio met in Madrid, Spain, at the prestigious Reina Sofía School of Music. All its three members have been awarded in their respective instrumental disciplines by Her Majesty Queen Sofía, and they have received the Reina Sofía School of Music “Most outstanding Chamber Music Group” award under the tutelage of professors Günter Pichler, Heime Müller, and Marta Gulyás.

The Albéniz Trio has built up its own identity throughout its career: not only do they perform most of its repertoire from memory, but they also interact with the audience in their concerts. Moreover, the features that best characterize this ensemble are high professionalism in the interpretation of music, their youthful style and their closeness to the new generations of aficionados. As a result, they have received awards such as the 2020 “Jeunesses Musicales” Prize, and in June 2021, 1st prize at the IX “Antón García Abril” International Chamber Music Competition, Spain. In April 2022 they received the 1st Prize and the “Arthur Rubinstein” Special Prize at the XXI “Kiejstut Bacewicz” International Chamber Music Competition in Łódź, Poland.

The Albéniz Trio already has a busy agenda of future commitments for the 2022-23 season. They are winners of the “Rising Ensemble” Award 2022 of the FestClásica chamber music series in Spain. They will take
part in highly prestigious festivals such as the Rheingau Musik Festival, Hohenloher Kultursommers Festival in Germany, in the 71st Edition of the Granada International Music and Dance Festival, the Huéscar Classical Music Festival, Spain, “Miami Music Concerts” in Florida and the International Forum for High Improvement of Southern Europe.

The Albéniz Trio continues its artistic development through masterclasses by important artists such as Menahem Pressler, Günter Pichler, Quatour Ébène, Rainer Schmidt, Péter Nagy, Luis Fernando Pérez, Dirk Mommertz, Priya Mitchell, Cuarteto Casals and Vogler Quartett. In addition, the Albéniz Trio, in its constant search for inspiration and innovation in its art, is part of the chair of chamber music at the “Hochschule für Musik und Theater” in Munich, Germany, in the company of artists such as Dirk Momertz, pianist of the renowned Fauré Quartett and the Quatour Ébène.

Formed at The Glenn Gould School (GGS) of the Royal Conservatory of Music in Toronto, the Mykola Trio (MEE-ko-la) is composed of Daniel Dastoor (violin), David Liam Roberts (cello) and Godwin Friesen (piano). Successful chamber musicians separately, they began playing together in 2021, receiving coaching from Bryan Epperson. Five months later, they won first prize at The GGS Chamber Competition performing Tchaikovsky's Piano Trio. Recognized for their depth of storytelling and strong musical conviction, the Mykola Trio has had several performances in Toronto with highlights including a recital in the concert series “Concerts at 100” and the premiere of a new work for piano quartet.

Individually, the three artists bring extensive experience to the group. Daniel is a winner of the Calgary Philharmonic’s Marley Rynd Scholarship, has performed as soloist with the Lethbridge Symphony and Calgary Philharmonic, and has competed at the Joseph Joachim Violin Competition and the Fischoff Chamber Competition. He holds an Artist Diploma from the GGS, where he studied as a Temerty Fellow with Paul Kantor and Barry Shiffman, and is now pursuing an Artist Diploma in Chamber Music at the San Francisco Conservatory in the studio of Ian Swensen. David Liam received the 2021 Michael Measures Prize through the Canada Council for the Arts and performs regularly with the Toronto Symphony Orchestra. He is currently pursuing an Artist Diploma at the GGS, where he is a student of Hans Jørgen Jensen and Andrés Díaz and is a Temerty Fellow. Godwin recently won second prize at the PianoArts North American Piano Competition and was also a quarterfinalist in the 2022 Dublin International Piano Competition. Having performed concertos with several orchestras including the Milwaukee, Saskatoon and Regina Symphonies, his favourite concerto experience was directing from the piano an orchestra of his fellow GGS students. He received an Artist Diploma from the GGS and is now a graduate student at l'Université de Montréal, studying with Henry Kramer.

Daniel plays on a 1737 Guidantus violin on generous loan from the Banff Centre for Arts and Creativity. David Liam plays on a cello that was made specifically for him in 2017 by Canadian luthier Garth Lee.

Trio Basilea was formed in Basel, Switzerland in 2021 and has since then developed and grown, inspired by their shared ambition and passion for chamber music. Their strong rapport as a group has been recognized by others as they have been invited to perform for the Federal Council of Basel-Stadt as well as in Open Chamber Music Concerts. Recently, Trio Basilea had masterclasses with Steven Isserlis and Péter Nagy and are currently students of Prof. Anna Gebert at the Musik Akademie Basel.

Laurentiu Stoian, violin
Currently a student of Prof. Adelina Oprean in Basel, Laurentiu Stoian has had masterclasses with great names such as Leonidas Kavakos among others. He is also a prize winner at "Modest Iftinchi International Competition Bucharest" and "International Arthur Grumiaux Competition"
Marina Martins, cello
Marina Martins is currently a student of Prof. Danjulo Ishizaka, and is a first prize winner in competitions in England, Austria, Italy and Brazil. Recently she was invited to record the Santoro Cello Concerto for Naxos Record Label and was loaned a 1700 Giuseppe Guarneri 'filius Andrae' by a private collector.
Zofia Grzelak, piano
Zofia Grzelak currently studies medicine alongside her musical studies in Basel after graduating from Master Performance in the class of Prof. Claudio Martínez Mehner and Ronald Brautigam. She is a recipient of multiple music scholarships and awards and has played as a soloist in venues such as the Wiener Konzerthaus and Schloss Nymphenburg.

Trio Incendio was founded in 2016 in Prague. The trio has won several national and international competitions, for example Gianni Bergamo Classic Music Award in Lugano, Coop Music Awards in Cremona, Concorso Musicale “Marcello Pontillo” in Firenze, Kiejstut Bacewicz Competition in Lodz, Concorso “Massimiliano Antonelli” in Latina and Bohuslav Martinů Competition in Prague, where they also gained the Special Prize for the best interpretation of the work by Martinů. In March, Trio Incendio was awarded the 2nd prize at the Joseph Joachim International Chamber Music Competition in Weimar while the 1st prize was not awarded.

The trio is a member ensemble of the European Chamber Music Academy, which gives young ensembles a possibility of working regularly with distinguished artists and professors such as Hatto Beyerle, Johannes Meissl and all the other members of the Artis Quartet, Julius Berger, Alexander Lonquich, Karla Haltenwanger (Boulanger Trio), Avedis Koyoumdjian, Marianna Shirinyan, Boris Berman, Itamar Golan, Jan Talich and Petr Prause (Talich Quartet), Vida Vujić, Patrick Jüdt, Minna Pensola (Meta4 Quartet) or Dirk Mommertz (Fauré Quartet), Hyung-ki Joo. The trio also took part in a masterclass with Rainer Schmidt (Hagen Quartet) and had two sessions of a public masterclass with Alfred Brendel on Piano Trios by Schubert. One of the masterclasses on Trio No. 1 has already been released on a DVD by the Supraphon label. In 2019, Trio Incendio was invited to join the Le Dimore Del Quartetto organisation.

Trio Incendio participates regularly in the International Summer Academy in Reichenau, organised by the University of Music in Vienna. At the academy, they were awarded the Wiener Klassik Prize, Bohuslav Martinů Prize and AHUV Prize for the best interpretation of Czech contemporary music. The trio also got the Chamber Music Prize for the best ensemble of the academy and the Audience Award.

Trio Incendio performs both in the Czech Republic and abroad. The young ensemble has already given concerts in some of the most important European venues such as Philharmonie Berlin, Wigmore Hall or Rudolfinum in Prague and has been invited to festivals like Ticino Musica, the chamber music season of the Prague Spring Festival or the Davos Festival. Their concerts are appreciated for their passion, stylistic clarity and the beauty of the sound.

The Sonoro String Quartet was founded in 2019, and consists of Martha-Pil Neumer (violin), Tuva Odland (violin) Joshua Kail (viola) and Hedda Aadland (cello). They have studied at Barratt Due Institute of Music, where they received chamber music lessons from Kari Ravnan and Geir-Inge Lotsberg, the first violinist of the Oslo String Quartet. The quartet is part of the Young Oslo Quartet series , as the first young string quartet being engaged three years in a row (2019-2021). As part of the young quartet series, they receive concert experience and master classes with world- renowned quartets. Previously, the quartet has played for members of the Vision String Quartet, Juilliard String Quartet, Skampa Quartet, as well as the three major Norwegian quartets; Vertavo, Engegaard and Oslo String Quartet.
Sonoro has also been engaged in several chamber music festivals in Norway, where they have given both formal and informal concerts. The quartet participated in Sandefjord during Fjord Classics 2019, and was also a part of the Lofoten International Chamber Music Festival the same summer. In January 2020 they participated as a YAGA-ensemble during Glogerfestspillene, where they held a recital, and performed the fierce Shostakovich string octet together with Oslo String Quartet. The following summer Sonoro played the concert at Horten Chamber Music Festival, and arranged their own Up and Coming mini-tour in Lofoten. The quartet was invited to Trondheim to take part in the international chamber music academy, taking place in September 2020. This enabled the quartet to work with both the Vertavo Quartet and Quator van Kujik, and perform Brahms string quintet no.2 in the final concert with violist Jennifer Stumm.
In October 2020, the Sonoro String Quartet participated in the Midgard Competition, and won both the chamber music class as well as the Midgard Prize. This resulted in several engagements, including Norsj festival in April 2021. They were also invited to Bergen by KODE, to record a Johannes Meissl in Vienna, and Minna Pensola in Helsinki. Sonoro has previously also been part of a jazz project at Victoria scene in Oslo, chamber music concert in Harald Severuds home, Siljust l. In April 2021 the quartet also took part in the chamber music program ECMA and played, virtually, for both collaborating with Norway's foremost jazz players.